The UK became one of the world’s 15 largest markets for industrial robot sales last year, after a long absence from the league, according to new analysis from the International Federation of Robotics (IFR). The number of industrial robots installed in the UK increased by 2,205 (8%) in 2020 to a total of around 23,000 (6% more than in 2019), but the country was still outside the top 20 worldwide in terms of robot density – the number of robots installed per 10,000 industrial workers.

The automotive industry remains by far the largest user of industrial robots in the UK, with sales in this sector increasing by 16% to 875 machines in 2020, representing 40% of all industrial robot installations in the UK -United.

The food industry nearly doubled its number of installed robots, from 155 in 2019 to 304 in 2020 (a 96% increase). This sector has traditionally had a large number of foreign workers, often from Eastern Europe, but is now facing significant labor shortages due to Covid-19 travel restrictions and Brexit.

the IFR expects demand for industrial robots in the UK to grow “sharply” at double-digit percentage rates in 2021 and 2022. He predicts that government tax incentives will accelerate the modernization of UK manufacturing industry. 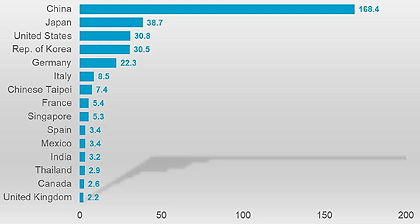 “The UK has a strong manufacturing industry with a surprisingly low annual number of robot installations,” comments IFR Chairman Milton Guerry. “The automotive industry and general industry must invest in automation technology to keep up with international competition.”

Industrial Robots Market Size, Scope, Growth Opportunities, Trends by Manufacturers and Forecast to 2029 – This Is Ardee